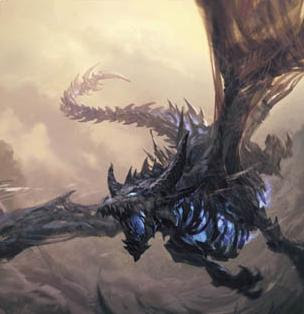 Sindragosa, formerly the prime-consort of Malygos, is a mighty frost wyrm who was raised by the Lich King himself at Sindragosa's Fall in Icecrown. She is the very same frost wyrm that the Lich King raised in the Wrath of the Lich King cinematic, as the same scene is played out after completing the quest Where Dragons Fell. Sindragosa was the beloved consort of the blue dragon Malygos, also called the Spell Weaver, guardian of all arcane magic. With the help of goblin servants, Neltharion created a powerful artifact called the Dragon Soul. He convinced his dragon brethren to empower the disk, claiming it would thwart the impending invasion of the demonic Burning Legion.

However, Neltharion betrayed his dragon allies during the Legion's assault, provoking an apocalyptic battle in the skies over the Well of Eternity. Malygos and Sindragosa joined the blue dragons in surrounding the Earth Warder. They charged the black dragon...but Neltharion used the might of the Dragon Soul to strike out, decimating nearly all of the blue dragonflight. The blast hurled Sindragosa far across the land, deep into the frozen north. 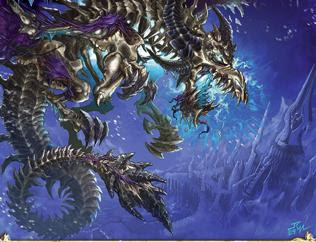 Sindragosa is briefly seen in the Pit of Saron, the second 5-man Icecrown instance, after the defeat of Scourgelord Tyrannus. While the leader of the army of liberated slaves (Martin Victus for Alliance, Gorkun Ironskull for Horde) commends the players for their bravery and their efforts to free them, Sindragosa flies up from the pit below and unleashes her fury, killing the leader and his army. The players are pulled back to the entrance tunnel by Jaina Proudmoore or Sylvanas Windrunner, saving them from a grisly death. She is slain in the innermost sanctus of Icecrown Citadel by adventurers led by Tirion Fordring and Darion Mograine who seek the death of Arthas Menethil, the Lich King.
Posted by bluedreamer27 at 9:00 PM

have you ever watch Game of Thrones?

the name you mentioned here, sounds like the name in the characters of that series. haha!