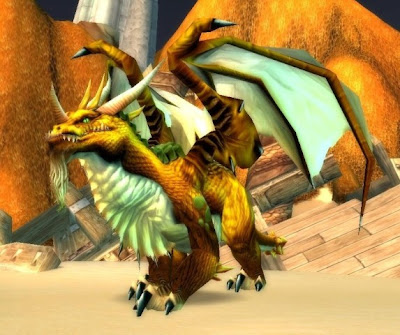 Anachronos the Ancient is the child and heir of Nozdormu the Timeless One and as such is a prominent member of the bronze flight.

During the War of the Shifting Sands, Fandral Staghelm sought the aid of the elusive bronze dragonflight. Initially, the Bronzes refused, but their decision was reversed when the brazen Qiraji attacked the Caverns of Time. Nozdormu's heir, Anachronos, agreed to enlist the bronze dragonflight against the marauding Qiraji.

Even with the might of the dragons backing them, however, the sheer numbers of the Qiraji and silithid proved overwhelming. And so Anachronos called upon the progeny of the remaining flights: Merithra, child of Ysera of the green flight; Caelestrasz, child of Alexstrasza from the red, and Arygos, child of Malygos from the blue.

The dragons and winged Qiraji clashed in the cloudless sky above Silithus. It is rumored that the dragons flying above the ancient city from which the Qiraji emerged saw something distressing there; something that hinted at a more ancient, terrifying presence behind the onslaught of the insect race. It was this revelation that spurred the dragons and Staghelm to hatch their final, desperate plan: to contain the Qiraji within the city, to erect a barrier that would confine them until a more hopeful stratagem could be devised.
Now, 1000 years later, he is still guarding the Caverns of Time in Tanaris. Anachronos now seeks to finish the war with the Qiraji. Little did he know back then that all three scepter guardians, whether by agents of the Old Gods or betrayal by those that would call them friend, would fall to tragedy. His agent, Baristolth of the Shifting Sands, seeks a mortal champion to recombine the scepter and open the Gates of Ahn'Qiraj. A transcript of the final events of the war as shown to Anachronos' chosen champion can be found in the quest A Pawn on the Eternal Board.
Posted by bluedreamer27 at 9:56 PM