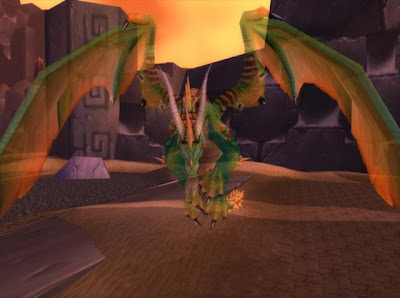 The ancient green dragon Merithra (known as Merithra of the Dream) is a child of Ysera and a major figure in the War of the Shifting Sands. She can be found in the Temple of Ahn'Qiraj taking the form of a Night Elf, taken captive by the Qiraji alongside Caelestrasz and Arygos. When approached she, like Arygos, offers to craft weapons when given Imperial Qiraji Regalia and three Elementium Ores. 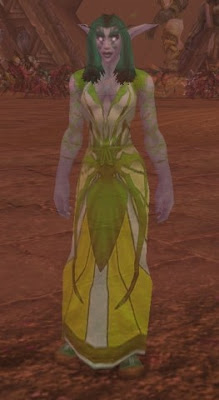 When the Qiraji started their first invasion of Kalimdor, Anachronos agreed to enlist the bronze dragonflight against the marauding Qiraji with the Night Elves. Even with the might of the dragons backing them, however, the sheer numbers of the Qiraji and silithid proved overwhelming. And so Anachronos called upon the progeny of the remaining flights, including Merithra of the green dragonflight

Merithra, along with Caelestrasz and Arygos, pushed the Qiraji back into Ahn'Qiraj to allow Anachronos, Fandral Staghelm, and the Night Elves to create a magical barrier to hold in the Qiraji. The three dragons and their companions flew headlong into the Qiraji legions, into the city where they hoped their sacrifice would not be in vain. Though the magical barrier was created, the three dragons were lost within the walls, where they still remain today, in humanoid form, as prisoners of the Old God C'thun.

Email ThisBlogThis!Share to TwitterShare to FacebookShare to Pinterest
Labels: Dragon Aspects, Marithra of the Dream, Merithra, World Of Warcraft