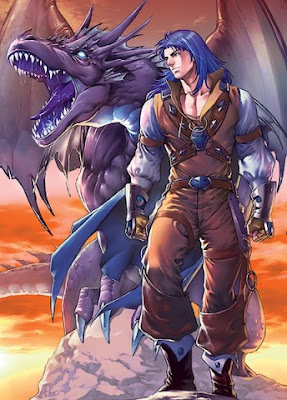 Kalecgos is one of the few surviving blue dragons, a former servant of the great Aspect Malygos, and the current aspect of magic and ruler of the Blue dragonflight. He disguises himself as a half-elf, calling himself Kalec. Due to the blues being most in tune with magic of all the aspects, Kalec has the powers of a sorcerer and the strength of a warrior.

After the Nexus War, Kalecgos seems to have become some kind of an advisor to the Wyrmrest Accord. Him being a blue dragon, that is a unique trait given the rest of the dragonflights were at war with the blue flight. Kalecgos was a youngster of the blue flight, sent as an investigator by Malygos to Quel'Thalas to locate what appeared to be residual energies from the Sunwell, believed to have been destroyed by the Scourge some time before. What he found - after being severely injured by the dwarven dragon hunter Harkyn Grymstone and his band - was a strange young human named Anveena Teague, who lived with her parents outside Tarren Mill. As they evaded Harkyn's band of hunters as well as the occasional agent of the Scourge, Kalec and Anveena teamed up with Kalec's intended, Tyrygosa, and the human paladin Jorad Mace. While in Tarren Mill, they were confronted by the Scourge led by the elven traitor Dar'Khan Drathir, who sought the power of the Sunwell for himself. He believed it may have been the dragonling Raac, hatched from an egg found in the ruins of Anveena's home, but later events prove this false. 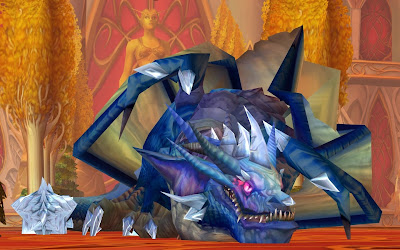 Kalec is located at Bilgewater Harbor in Azshara, fearing that the death of Malygos is a sign of weakness on the part of the blue dragonflight, and that Deathwing will send agents to assassinate the remainder of the flight. This holds true as the black dragonflight has invaded Azshara to hunt down Azuregos. Kalec and Azuregos help low level Horde players to repel the invasion.
Kalecgos becomes the new Blue Aspect when an astronomical event called the "Embrace", where both of Azeroth's moons come in perfect alignment, takes place when observing with the rest of his flight at the Nexus. This happens just in time as Arygos, now working with the Twilight's Hammer, realises he will not become the Blue Aspect and calls for the twilight dragons for battle. Kalecgos's new found powers proved too strong for the twilight dragons, which caused the twilight dragons to retreat. Kalecgos knowing him and his blue flight had the advantage, gave pursuit to the twlight dragons and chased them back to their newly found base, Wyrmrest Temple, where Kalecgos was met in battle by a very strong chromatic dragon called Chromatus. This newly created abomination proved too powerful even for the newly empowered Blue Aspect and his blue flight and sent them fleeing back to the Nexus.
Posted by bluedreamer27 at 10:54 PM