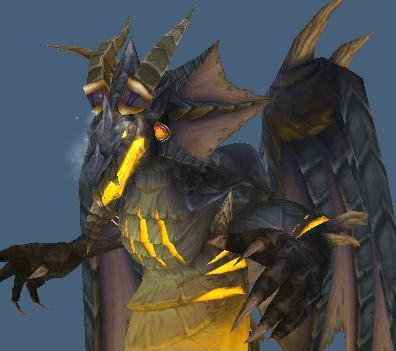 Sintharia, also known as Sinestra or Lady Sinestra, was the former prime consort of Deathwing and mother of Nefarian and Onyxia. She was, until recently, believed dead. Her experiments led to the creation of a flight of twilight dragons which she planned to use to rule Azeroth. Her plans never came to fruition, and her supposed death finally came at the hands of her own creation, the twilight dragon Dargonax. Sintharia was once the prime consort of Neltharion, who later came to be known as Deathwing. She gave birth to some of Deathwing's most despicable children including Nefarian and his sister, Onyxia. After Neltharion's madness overtook him and the rest of the black dragonflight, the newly disfigured Deathwing attempted to mate with his consorts, causing Sintharia a great deal of pain and leaving behind scars and burn marks. Sintharia was the only mate known to have survived. After the disappearance of Deathwing and the deaths of Nefarian and Onyxia, Sinestra reemerged hoping to continue her family's plan of creating a superior dragonflight to rule over Azeroth. Gathering up what shards of the Demon Soul she could find and Balacgos's Bane, Sinestra used these relics, along with the eggs of various flights she had collected over the centuries and the captured nether dragon Zzeraku, to create the twilight dragonflight. One of the first of these new twilight dragons was Dargonax, whom she considered to be her child. Her old nemesis Korialstrasz, along with others such as Zzeraku, the blue dragon Kalecgos, the wizard Rhonin, Vereesa Windrunner, and the draenei priestess Iridi, put a stop to her operation. When Dargonax's already unstable powers finally destabilized, he burned away, taking his "mother" with him. Korialstrasz believed that Sintharia's last, angered glance may have been at him.

After being resurrected by her mate, Sinestra has returned in World of Warcraft: Cataclysm. She will be featured in the Bastion of Twilight, accessible only after completing the final encounter of the instance on Heroic difficulty. Because of her presence in the Bastion of Twilight, it is assumed that she leads in the shadow the Cho'gall's clan, the Twilight's Hammer clan, on behalf of the Black Dragonflight. The presence of eggs shows she watched a brood. During the fight against her, we can see various Twilight Whelp and Twilight drake, this proves she continues the "farming" of Twilight brood for her mate. It seems that she was defeated by heroes helping by Calen until his death.
Posted by bluedreamer27 at 8:55 PM