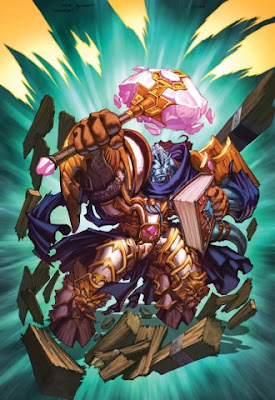 Vindicator Maraad is a draenei paladin stationed aboard the Skybreaker which is flying above Icecrown. He wields Hammer of the Naaru. His sister became the mother to the assassin Garona Halforcen. He is currently Garona's oldest living relative, and with the death of Aegwynn, to her son Med'an as well.
Maraad rescued Garona from Theramore, and revealed that he is Garona's uncle (and therefore Med'an's great uncle). He explained that Gul'dan had bred his sister to one of his warriors (which, considering orcish/draenei relations at the time, implies rape), which resulted in Garona's birth. Once he had learned of his sister's daughter, Maraad began his years-long search for her. He has now become a founding member of the New Council of Tirisfal.
Posted by bluedreamer27 at 7:38 PM