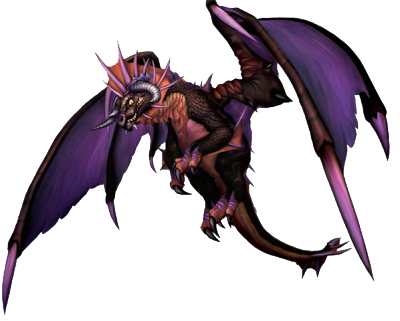 Onyxia is the current broodmother of the black dragonflight on Azeroth. After carefully calculating her plans for many years, she entered into a pact with her elder brother, Nefarian, to take over for their missing father and gain control of the entire flight. To this end, she has begun manipulating many mortals and dragons alike to her own ends and wields considerable political power over many groups.

One of Nefarian's mightiest supporters is his younger sister, Onyxia. A clever, highly intelligent dragon, she delights in corrupting the mortal races by meddling in their political affairs. To this end, she takes on various humanoid forms and uses her charm and power to influence delicate matters between the different races. Onyxia has even assumed an alias once used by her father: the title of the royal House Prestor.

Though Onyxia is relatively small for a black dragon of her age, she shares the same powers and abilities as the rest of her terrible flight. Her searing breath weapon can melt both stone and iron. Her physical attacks, whether bites, scrapes or tail lashes, are lightning quick and nearly unstoppable. When cornered, Onyxia is fond of taking flight and blasting her troublesome prey from above. 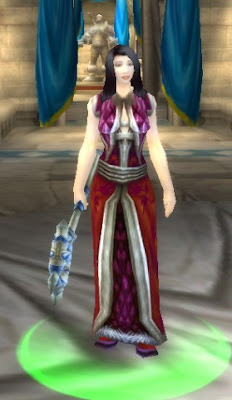 Onyxia initiates combat using her breath weapon and then moves directly into melee, preferably targeting soft targets such as spellcasters. If given a chance to prepare before battle, she uses defensive spells to augment her fighting ability. When she is damaged too much, Onyxia takes to the air. If she is still sustaining a great deal of damage in the air, she sticks to spells, to make sure she can retreat if badly wounded. If heavily injured she either retreats (if in open air) or descends to the ground to reenter melee (if inside her lair). She attempts to land on her enemies and crush them as she comes down to the ground. When she reaches the ground, she immediately uses Deep Breath against the largest group of opponents within range. At this point, she fights to the death if necessary, retreating only if a chance presents itself. If engaged while in human form, she fights using spells unless her attackers clearly know she is a dragon; if her enemies know her identity, she tries to retreat to her lair
Onyxia's human alias is Lady Katrana Prestor, the woman who used to stand immediately to the right of the boy king, Anduin Wrynn. She could be revealed as a dragonkin by Hunter dragonkin detection, and did not show up as a humanoid when using "Track Humanoids". Her exact purpose at court was unclear, but it was probably to undermine the state of affairs in Stormwind. Onyxia controlled Highlord Bolvar Fordragon through the use of the Drakefire Amulet. It is rumored that Onyxia may have played a part in refusing to pay the Stonemasons guild for the rebuilding of Stormwind. Then, using her black dragonflight and corrupt Stormwind nobles, she formed an alliance with the Defias Brotherhood and played a part in kidnapping the King of Stormwind (giving her more control of the kingdom, and preventing a possible Horde/Alliance negotiation). She may also have used the kidnapping to convince Stormwind's nobles (particularly Bolvar) to not send troops to Westfall, Lakeshire, and Darkshire, in an attempt to increase the strength of the Brotherhood and the Blackrock clan in those regions, which are both rumored to be allied to the black dragonflight, and cause chaos throughout the human lands. This is a tip of the hat to her father Deathwing, who wore the form of Lord Daval Prestor during the events that led to the freeing of Alexstrasza.
Posted by bluedreamer27 at 9:38 PM