Azgalor was once the lieutenant to the mighty demon-king Mannoroth. Following Mannoroth's death at the hands of the orc Grom Hellscream, Azgalor took it upon himself to direct the Burning Legion's ground forces at the Battle of Mount Hyjal. Though he isn't as clever as his former master, he has an aptitude for chaos and violence that is legendary even among demonkind. Following his master's death, Azgalor took control of the Burning Legion's ground forces and accompanied Archimonde as he made his ascension up Mount Hyjal towards Nordrassil, the World Tree. After various attacks, Azgalor invaded but was repelled; after some time he began to attack alongside Rage Winterchill but was still held back.
Though the Legion was defeated that day and Azgalor seemingly vanquished, he escaped into the Twisting Nether to plot his revenge against the mortal armies of the world, seeking to destroy all life on Azeroth by employing whatever forces he could utilize. 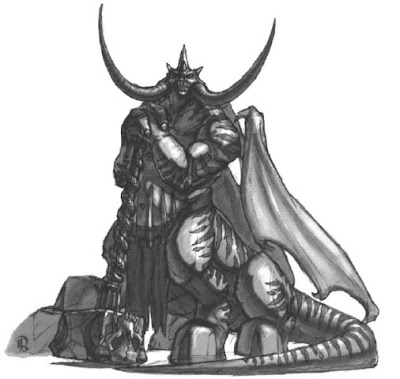 Five years after Azgalor was defeated, dark agents attempted to alter the course of history as they tried to sabotage the Battle of Mount Hyjal. The bronze dragonflight sent adventurers to prevent it via the Caverns of Time. Because of this intervention during this battle, Azgalor didn't fight until reaching the orc base. There he fought Thrall, troops of the Third War, and adventurers from the future, but this time he was killed in the battle. It is unknown what happened to Azgalor as he survived in the original timeline but was killed in the altered timeline. It is possible that he is dead, such as Hakkar the Houndmaster survived the War of the Ancients in the original timeline but was killed in the altered timeline; another possibility is he was just defeated and later escaped to the Twisting Nether as in the original timeline.
Posted by bluedreamer27 at 5:47 PM