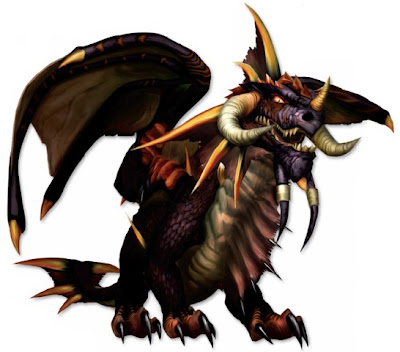 Nefarian (also known as Blackwing) is a black dragon and the eldest son of Deathwing. He appears in his human guise as Lord Victor Nefarius, the Lord of Blackrock. Holding the Blackrock clan and various clans of ogres under his control, Nefarian rules from his lair at the top of Blackrock Spire. Nefarian speaks Common, Darnassian, Draconic, Dwarven, Goblin, Gnomish, Low Common, Orcish, Thalassian and Zandali. Chris Metzen is believed to be the voice of Nefarian (though there is no definite proof that this is true)
The black dragonflight was among the greatest threats to mortal life the world has ever known. Led by the fallen Aspect, Deathwing, the black dragons ravaged and subverted the kingdoms of humanity and elves for generations. Yet, during the Battle of Grim Batol (nearly fifteen years ago), Deathwing was defeated by his fellow Aspects— though he managed to escape complete destruction at their hands. While he was regaining his strength in Deepholm, the random destruction indicates no direct control over his diabolical flight. 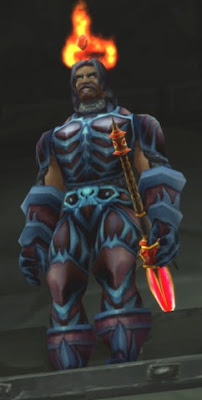 Nefarian usually enters combat in human form at first, summoning his many minions and allies while he wears down his enemies with powerful spells. If seriously threatened, he takes on his true form, using his shadow flame breath to incinerate anyone who is not properly protected. He uses his corrupted power ability to incapacitate whatever characters he feels are the greatest threat. If badly wounded, Nefarian uses his powerful magic to retreat. If prevented from retreating, he uses his most powerful spells and abilities to turn his enemies against each other, and to drain their health and spells while restoring his own. Nefarian’s breath, known as shadow flame, is among the deadliest of any dragon’s attacks. Any living target affected by Nefarian’s breath is set afire with shadow flame, taking terrible damage. The only protection from this attack is the scales of another powerful black dragon.
Posted by bluedreamer27 at 9:21 PM