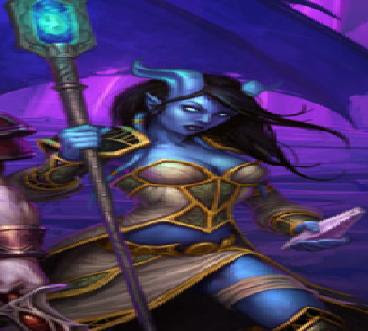 Iridi was a draenei priestess and an apprentice, along with her unnamed draenei friend, to an unnamed naaru in Outland. When they finished their studies, they were each given a powerful staff by the naaru. They eventually made their way to Azeroth with the hopes of using their power to help people. When Iridi's comrade was murdered by Vereesa Windrunner's cousin Zendarin — who in the process stole the staff from the corpse of the draenei — Iridi took upon herself the task of traveling to Grim Batol in order to retrieve the stolen staff. However, this quest expanded far beyond a stolen staff.
After arriving at Grim Batol, Iridi teamed up with Vereesa, Rhonin, Grenda, Rom, Kalec, and Krasus to prevent the black dragon — Deathwing's former consort— Sintharia from creating the twilight dragonflight. Within Grim Batol, Iridi found the chained nether dragon Zzeraku — whom Sintharia and Zendarin planned to feed to a twilight dragon, Dargonax. When everything seemed doomed, Iridi was successful in freeing Zzeraku so that he could battle and hopefully destroy Dargonax. After Zzeraku's draining battle with Dargonax, it appeared that the nether dragon would not be able to defeat the twilight dragon. Iridi gave all of her staff's power, and in the end almost all of her own, to empower Zzeraku. Even with the combination of the staff's and Iridi's power, Zzeraku was unsuccessful in fighting Dargonax and was devoured by the latter. In one last desperate hope to slay the twilight dragon, Iridi — with help from Rhonin, Vereesa, Krasus, and Kalec — used the last of her energy to destroy Dargonax. The major loss of power in the end proved too much for Iridi. After telling the group that she found that she wished to see Outland one last time, Iridi died knowing that she had played a large part in saving Azeroth. Granting Iridi's last wish, Kalec took her body to Outland to bury her.
Posted by bluedreamer27 at 7:26 PM