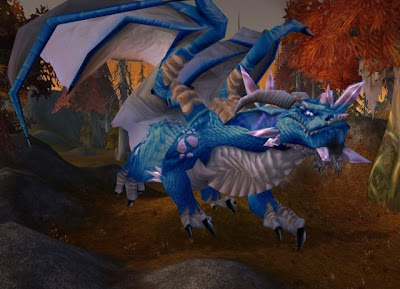 Azuregos is a world boss found in southeastern Azshara. The blue wyrm Azuregos is a trusted servant of the aspect Malygos. As a blue dragon, he is incredibly interested in magical artifacts and their protection. For this reason he guards the ancient night elf Ruins of Eldarath, in modern day Azshara.
Azuregos has not been seen since a group of bloodthirsty adventurers came through on some sort of quest to make a now-useless quiver. While no one knows where he has gone, there is someone in Bilgewater Harbor paying handomsely for information on his whereabouts.
Eventually it is discovered that he is hiding in the spirit world, and appears to be in a relationship with a Spirit Healer, Anara. He eventually agrees to help Kalecgos fight the Black Dragonflight, but disapproves of Kalecgos becoming the new Aspect of Magic.
Posted by bluedreamer27 at 10:48 PM