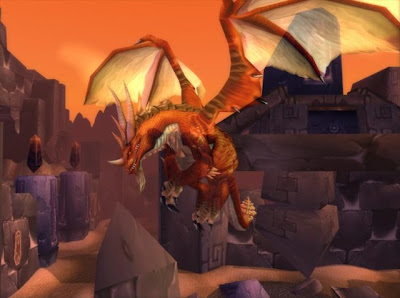 Caelestrasz (Calen in his night elf guise) is an ancient red dragon and a child of Alexstrasza. He currently waits in the Temple of Ahn'Qiraj in the form of a night elf, taken captive by the Qiraji alongside Arygos and Merithra. When the Qiraji started their first invasion of Kalimdor, Anachronos agreed to enlist the bronze dragonflight against the marauding Qiraji with the night elves. Even with the might of the dragons backing them, however, the sheer numbers of the Qiraji and silithid proved overwhelming. And so Anachronos called upon the progeny of the remaining flights, including Caelestrasz of the red dragonflight

Caelestrasz, along with Arygos and Merithra, pushed the Qiraji back into Ahn'Qiraj to allow Anachronos, Fandral Staghelm, and the night elves to create a magical barrier to hold in the Qiraji. The three dragons and their companions flew headlong into the Qiraji legions, into the city where they hoped their sacrifice would not be in vain. Though the magical barrier was created, the three dragons were lost within the walls, where they still remain today, in humanoid form, as prisoners of the Old God C'thun.

Caelestrasz, in his night elf guise Calen, reappears in Cataclysm outside Grim Batol along with Lirastrasza and Alexstrasza.

Calen also appears in his night elf guise during the Sinestra encounter, the heroic only final boss of The Bastion of Twilight. In this fight, he does battle with Sinestra, only to lose his life in the process. Upon dying, he grants the raid a 3 minute buff, granting 100% additional haste.