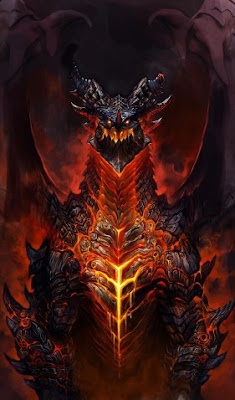 Deathwing the Destroyer, formerly known as Neltharion the Earth-Warder, is one of the five Dragon Aspects and leader of the black dragonflight. Thousands of years ago, Neltharion was empowered by the Titans with dominion over the earth and the deep places of Azeroth. However, driven mad by the Old Gods, he turned against the other Aspects during the War of the Ancients. Among both mortals and dragons his name has become one whispered with a feeling of fear and contempt.

The black aspect involved himself in the Second War, adopting the form of Lord Daval Prestor in order to destroy the Alliance from within. He also managed to turn his greatest enemy, Alexstrasza, into a slave of the Horde, with which he later allied himself. After a series of setbacks, culminating in his defeat at the hands of the other Aspects, Deathwing retreated to the elemental plane of Deepholm to recuperate. From there, he observed his former mate Sintharia's experiments with the twilight dragonflight in Grim Batol. He now continues his late consort's work.

Though believed dead by many, Deathwing made his return in World of Warcraft: Cataclysm, the third expansion to World of Warcraft, and his wrath constituted a pre-release event known as the Shattering, which changed the world of Azeroth permanently. The world continues to reel from the effects of Deathwing's return as he flies over Azeroth to randomly cast his flame. He will be the final raid encounter of Cataclysm, appearing as the last two encounters of the Dragon Soul raid.

Deathwing has control over the land and its fathoms, including lava. Like the rest of his dragonflight, lava features prominently in his attacks. He also has the ability to withstand extreme temperatures, such as those within volcanoes. 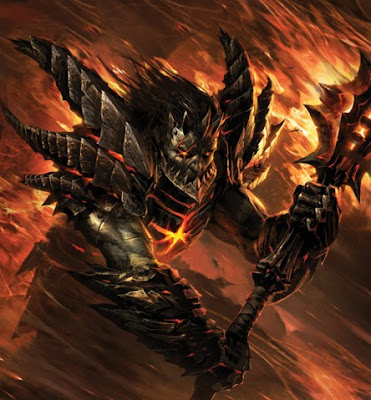 Deathwing is a terrifying opponent who is as cruel as he is vicious. He cares nothing for honor or nobility, striking with whatever weapons and cunning he has at his disposal, reveling in causing earthquakes and ripping open volcanic fissures. He often sends his minions into combat while he surveys the battlefield, striking at whatever weaknesses he discovers.
While Deathwing was once a benevolent entity, he is now completely evil. He hates all mortal races, and wishes to kill them all. He's also utterly insane, most notably shown when he had the Demon Soul. Deathwing was attached to it, such that even when warned by the goblin alchemists who made his first armor that the Demon Soul's energies would kill him if he kept it with him too long, it wasn't enough for him to let go of it, and was only willing to part with, temporarily, when reminded that it would likely be stolen from him if he was dead.

In spite of his insanity, Deathwing does display a degree of cunning. Although he hates mortals, he is apparently willing to tolerate them if it can prove of any help in his plans, though inevitably he will do away with them when they have outlived their usefulness.