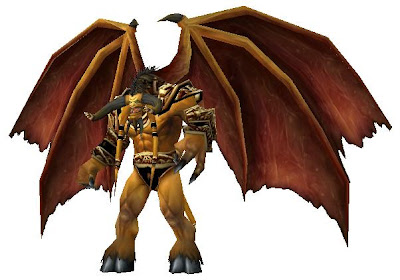 Kazzak the Supreme is a powerful elite doomguard commander. Once commanding the forces of the Burning Legion on the world of Azeroth, Kazzak was responsible for the reopening of the Dark Portal, and has since relocated to Outland, where he commands the Legion's armies there against all who would oppose them. Also known as Kil'jaeden's Right Hand and Lord of the Doomguard demons, Kazzak was one of Archimonde's most trusted lieutenants during the Third War. 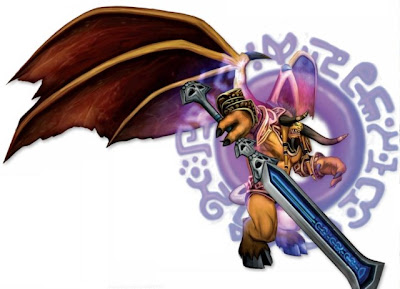 Lord Kazzak's main goal — indeed, his only goal — was to reopen the Dark Portal and return to Draenor, now the shattered realm of Outland. It was unknown if he had the intent to serve Illidan or raise an army to fight the night elf betrayer. Two years after the founding of Durotar, with the future in peril, a relic of the past had also surfaced, radiating renewed energy. This relic had enabled Lord Kazzak to activate the current Dark Portal, thereby reopening the gateway to the shattered realm of Outland. With the portal now opened, Lord Kazzak was seen departing through the Dark Portal. In his stead he left his minion, Highlord Kruul, to sow fear and confusion among the defenders. Accompanied by a host of infernals, Kruul was seen near a number of major cities in Azeroth. Once Lord Kazzak passed through back to Outland, he was promoted to Doom Lord Kazzak and set up his throne on top of Throne of Kil'jaeden, a mountain in the Hellfire Peninsula, which he protects to this day.