Velen has been the leader of the draenei people since their flight from Argus 25,000 years before the first orcish invasion of Azeroth. As his title entails, he has been granted the gift of prophecy, and — aided by the Light — has guided his people as they fled from, and later fought against, the Burning Legion who had ensnared their eredar brethren. He is first among the draenei and is the arch-nemesis (formerly best friend) of Kil'jaeden.
Velen, unlike Archimonde and Kil'jaeden, had the gift of "Sight", and was granted a vision by the naaru K'ure of the truth of Sargeras' plot. The utopia that Sargeras had promised was a lie, much to Velen's horror. He at first saw himself at the head of a vast eredar force of the Light, spreading the gifts of their race to worlds beyond count, as Sargeras had said; the next moment, he saw the truth. Sargeras had no intention of unification. His vision was one of death, of razing entire worlds to bare rock and ashes. And the eredar were not to be the bringers of enlightenment with their new powers; they would be man'ari, twisted, malevolent shadows of their former selves devoted to the destruction of worlds for the glory of Sargeras' terrible Burning Crusade. Horrified, Velen attempts to warn Archimonde and Kil'jaeden but they didn't believe him and thought it was only a delusion.Velen desperately prayed for guidance. K'ure appeared before him, reassured Velen that his plight had been heard, and instructed him to gather up his followers and go to the highest mountain on Argus, during the longest day of the year. Velen and his followers barely escaped the newly created Burning Legion. From then on, Kil'jaeden vowed to hunt down Velen and his followers and slaughter them, even if it took a thousand years 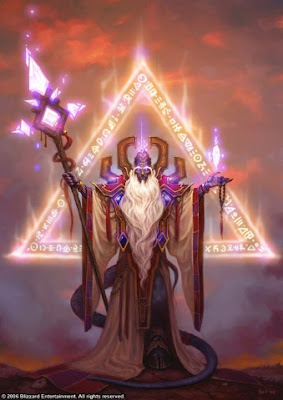 After entering the Vault of Lights, gather up in the middle, go slowly to upstairs by killing the Shields of Velen. When you enter his circle, DPS should spread out a little bit (not too much, just around the circle). Be sure that healers heal the aoe classes during the add waves, and every single dps should go for the Shields and Exodar Peacekeepers when they come to you.

The Prophet is surrounded by four Shields of Velen. These guards are relatively weak and can be taken down quickly. However, if any of these 4 guards evade, Velen and the rest of the guards will reset. He also seems to be leashed with random NPC's and guards nearby, so if they evade, he will reset. Right when you start the fight, he will spawn adds and the four guards standing next to him. You should bring members who can AoE, and if possible, a Paladin to AoE tank the adds (they don't hit hard). After you kill all the adds, focus on the boss. He hits for around 6k against plate and casts an AoE Holy Smite. Be sure to have your healers aware of it when it is cast. From time to time, he will knock back the main tank, dropping threat, and start attacking person with second threat. He is tauntable. After a while, Velen spawns another "wave" of adds, repeat the earlier process.

Alternately, a hunter can range tank Velen with adequate healing and reduces the difficulty of the encounter.