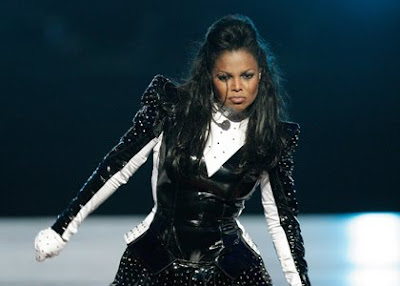 Janet Jackson will be hitting Manila this coming February and i am pretty excited about this event. We know how Janet Jackson performs! We know how she rocks the the stage and we know that the money that we're gonna spend for her concert will truly worth it! Well, I was born when Janet Jackson was in the lime light of the music scene. I was in elementary when everyone gets crazy over her. I was too young to appreciate her music at that time. That was back on college when i started to appreciate her music. However, it's a bit late because Janet Jackson is not that famous anymore but she has some hits in early in 2000's. And since i haven't heard anything from her since the last time she sang We are the world with so many famous artists of today.
Well, it gives me now an idea to list down few of her hits that i really love to listen with over and over again.
"Again" is one of my favorite song from her. I simply love the melody and its message as well. Just like his brother, Janet is well known for making amazing music video and the video she had for this song is simply notable!
Janet Jackson might not be a strong and powerful vocalist compare to other solo artists like Whitney Houston and Mariah Carey but her songs and her performances are truly amazing just like what she did with her "All For You" single.
Her "Rhythm Nation" absolutely proves that she can be onsidered as one of those very talented Dance-oriented singers like Paula Abdul, Madonna and Jennifer Lopez.
I love almost all her songs and it's too hard to list my top five.
Anyway, if you missed buying her CDs , all her songs are ready for digital download from Itunes. Itunes is not available outside the US so better get an iTunes Gift Card to give you access to the site without any limitations. You can even download her music videos there!
And now that she will be heading to Manila this February, I’m sure most of her fans will come over to see her performing live. The concert is a part of her Number Ones—Up Close and Personal World Tour. It will be held at PICC Plenary Hall, CCP Complex, Roxas Boulevard, Pasay City.
Posted by bluedreamer27 at 6:46 AM