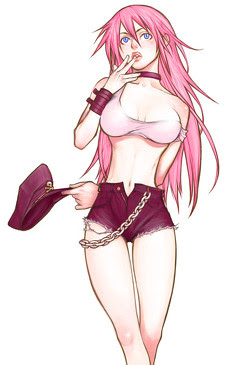 Poison is the friend and manager of Hugo. Poison can also be seen in Street Fighter Alpha 2, in Guy's Stage. Poison is a character from the Final Fight video game series, created by Akira Yasuda for Capcom. Introduced in the first Final Fight (along with similar character Roxy), she has appeared in later artworks and games in a cameo role, and is one of the few characters from the series to move on to a minor role in the main Street Fighter series. She was voiced by Atsuko Tanaka in the Street Fighter III series, and Masae Yumi in SNK vs. Capcom: SVC Chaos.

Beyond the Final Fight series, Poison has appeared alongside Hugo in Street Fighter III: 2nd Impact and its sequel Street Fighter III: 3rd Strike as his manager. She was planned to appear in Capcom Fighting All-Stars, but the game was canceled. She was also slated to appear in Final Fight: Streetwise, but, along with Sodom, was cut from the final game. 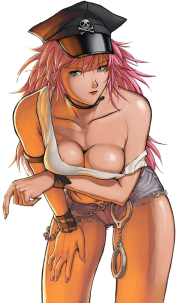 The discrepancy regarding Poison has been addressed more than once in interviews with former and current Capcom employees. Final Fight developer and Arika founder Akira Nishitani stated he supposed the character could be male, but added it was up to the viewer to decide. Street Fighter IV's producer Yoshinori Ono, when asked in an interview about the matter, stated "Let's set the record straight: in North America, Poison is officially a post-op transsexual. But in Japan, she simply tucks her business away to look female." He later emphasized it again when asked about what female characters could be included in the game Street Fighter IV, stating that it would be too confusing to include her due to the region-specific gender.
Posted by bluedreamer27 at 8:43 AM