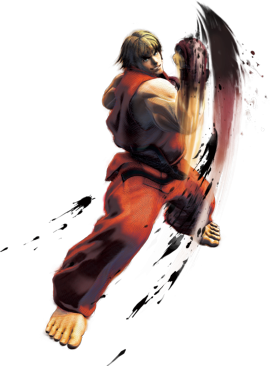 Ken Masters is a video game character created by Capcom. He is one of the main characters from the Street Fighter series of fighting games alongside Ryu. Although this has been debated by fans, Ken is also stated to be the second most popular character in the series, coming second to Ryu. Like Ryu, Ken's goal is to test his power against many different fighters and strive to become stronger. 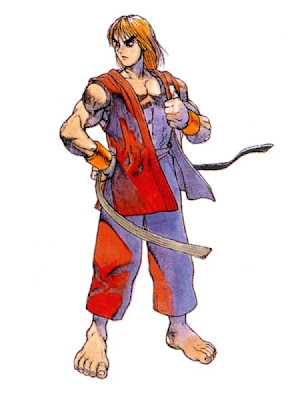 When Ken was about 12 years old, his father, a rich hotel tycoon, thought that his son needed to learn about discipline, or his son will become a spoiled brat all of his life and try to leech onto the Masters' family fortune. In order to do so, the elder Masters sent Ken to Japan to train under his best friend, the mysterious karate master Gouken. At first, Ken was very hesitant to learn from Gouken, wanting to go back to the United States, but later began to respect his master. He even enjoyed the company of Gouken's adopted son, Ryu, since he had a foil to finally pull pranks on, although this got Ken into a lot of trouble. Ryu and Ken would later become best friends and each others principal rivals.

Ken is most easily recognized by his sparring gloves (yellow in the Alpha Series, red or brown elsewhere) and bright red karate gi with the arms ripped off, similar to Ryu's (Capcom has said that a red gi was chosen to stand out and to reflect his more flashy style of fighting). His gi is usually seen in better shape than Ryu's, since he can easily afford to keep up with and/or own spares. His hair is blond (some sources indicate that his hair may in fact be dyed; evidenced that some of his sprites and official artwork depict him with brown eyebrows) and has long eyebrows. He wears a black belt at his waist and fights barefooted.
Ken mainly focuses on the Shoryuken move, to the point where his Shoryukens set the opponent on fire. Ken's Tatsumaki Senpuukyaku does not allow him to dodge projectiles at the start of the spin, but spins faster, allows him to hit his opponent up to five times. Ken's Hadouken attacks are less concentrated than Ryu's, but Ken's Shoryuken is more powerful.
Posted by bluedreamer27 at 11:41 AM