Juni is a video game character from the Street Fighter fighting game series. She made her first appearance in Street Fighter Alpha 3, where she was a brainwashed female assassin belonging to Bison's Elite Guard or "The Dolls." Her name is German for June, Her partner is Juli. 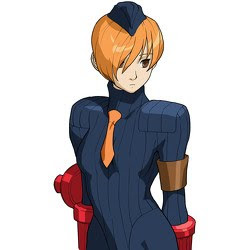 In the arcade version of Street Fighter Alpha 3, Juni and Juli are a pair of sub-bosses whom the player face prior to the final battle against M. Bison. The player face Juni and Juli at the same time in a two-on-one fight similar to the Dramatic Battle mode in the original Street Fighter Alpha. The two characters are unlockable in the arcade version, but they have no storyline in the actual game. The characters are actually head-swaps of Cammy (who previously appeared in Street Fighter Alpha 2 Gold and X-Men vs. Street Fighter), with the explanation given that Cammy belongs to the same unit as Juni and Juli (Bison's Elite Guard). However, the characters have their own special and super techniques. Juni's attacks in particular are mostly based upon Cammy's appearance in the Vs. series, including an aerial version of Spiral Arrow and a version of push-blocking called "Psycho Shield". In the American instruction booklet for Alpha 3, Juni's Spiral Arrow and Cannon Spike where named (seemingly erroneaously) as Psycho Crusher and Psycho Shot respectively.
Posted by bluedreamer27 at 12:16 AM