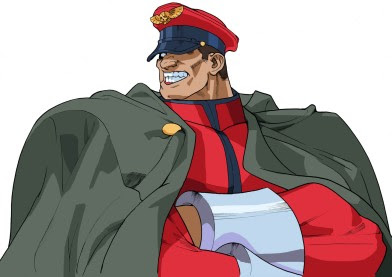 M. Bison, known as Vega in Japan, is one of the main villains and primary bosses of the Street Fighter games. M. Bison was inspired by Yasunori Kato, the main villain from the fantasy film, Tokyo: The Last Megalopolis. In Street Fighter Alpha 3, he refers to himself by the full title of Master Bison. His first chronological appearance is in Street Fighter Alpha 2, as the head of an elusive criminal and military organization known as Shadaloo. Along with his aspirations for world conquest, M. Bison has been working on perfecting a lethal and deadly energy that will exponentially increase his fighting ability, an inherently evil energy he refers to as "Psycho Power". 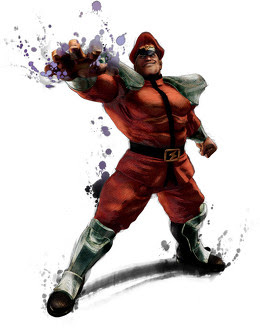 His general attire consists of a red military uniform with large silver shoulder plates, wrist bands, and shin guards; on his cap is the skull insignia of his crime syndicate known as Shadaloo (sometimes referred to as Shadowlaw or Shadowloo). His clothing highly resembles the uniforms worn by SS officers of Nazi Germany, the winged skull on his visor cap and the first letter of Shadaloo on his belt is shaped as a single sig rune. The fact that Bison has anything to do with Nazi Germany storywise has yet to be confirmed since there's no official reference to this for except his clothing. Bison's eyes lack both pupils and irises (exception in "Street Fighter Alpha," when he had his original body), leaving them a ghastly white color. He sports a dark colored cape in the Alpha series, in which he appears with his original body. In Street Fighter II and the Capcom vs SNK series, he appears with a much slimmer body, and removes his cape before battle. 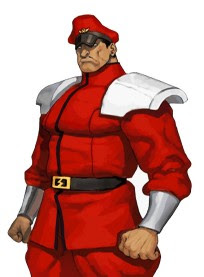 M. Bison is a "charge character" in that his special moves require that you hold in directions for a few seconds before pulling a move off. One of his special moves is the "Psycho Crusher" which sends him flying in the direction of his opponent with a damaging spin. The "Double Knee Press/Scissors Kick" allows him to do a forward flip which will knock the opponent away. With the "Head Stomp", Bison jumps into the air and homes into the opponent, bouncing off their heads in which he can follow up and smack them with his own hands. Bison also posseses the "Devil's Reverse," wherein he leaps forward like the Head Stomp, but will then flip upside down and chop the enemy with a Psycho Power-covered hand when any punch button is pressed. This acts as both a fake-out version of the Head Stomp, and as a viable attack, allowing Bison to play with his opponent's head.
Posted by bluedreamer27 at 11:26 AM