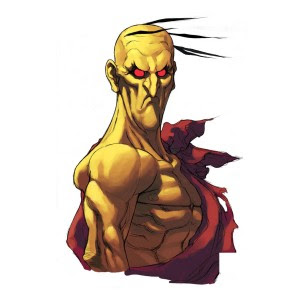 Oro is an ancient, mysterious hermit who seeks a fighter that is worthy to inherit his fighting style. He is of Japanese descent and hails from the Amazon Jungle, where he lives in a cave with his many pets, including a turtle and a dog. Oro made his living as a martial arts instructor in Japan in his younger days. He moved to Brazil with a friend in the early 1900s. Unfortunately, his life in Brazil wasn't going very well and he eventually became a recluse. He spent much of his time practicing Senjutsu (仙術, "Mystic Arts" - techniques used by the immortal mountain hermits in Taoist myth). Finally, after several dozens of years, Oro had mastered it.

Oro occasionally leaves his cave and visits town. Out of boredom, he embarked on a journey (traveling the world atop a jumbo jet) to seek out the ideal successor to his Senjutsu style. This was the first time he left Brazil since he moved there.

Oro binds one arm while fighting, to keep from accidentally killing his opponent (except when performing specific special arts). Canon-wise, Oro is one of the most powerful characters in the series, alongside Akuma at full strength (Shin Akuma) and Gill. He has full mastery over his Ki, giving him monstrous strength and stamina far surpassing all other fighters in the world, even in his old age. He also has the power of telekinesis being able to pull in random objects and use them for a limited amount of time.
Posted by bluedreamer27 at 8:40 AM