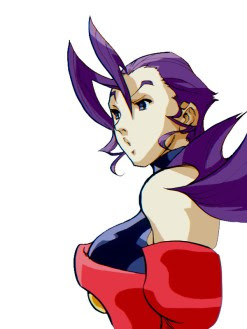 Rose is a fortune teller from Genoa and sensed that Doomsday was approaching, and knew a person of great evil was causing it. In Street Fighter Alpha 2, she found the source of the evil in Bison and defeats him, thinking she has rid the world of him for good. Unfortunately, by reading her tarot cards, she discovered Bison was still alive. In Street Fighter Alpha 3, Rose learned that she and Bison share the same soul. She faces Bison once more and rams her fist through his chest, channeling her energy into his body. Rose used all of her Soul Power to defeat Bison, but it was not enough. Rose passed out from complete exhaustion, and was soon found by Guy (who she met earlier on when he went after Shadaloo). When Bison was defeated by Ryu (who destroyed his body temporarily in the process), Bison's soul went to the Psycho Drive. Charlie sacrificed his life to try and destroy the Psycho Drive, but was not successful. Bison's soul then went to Rose's body, making her his temporary host. 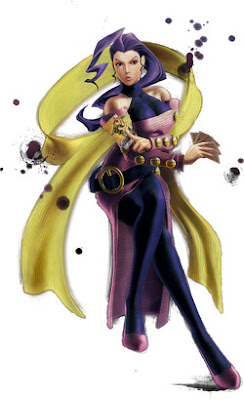 Rose is tall, curvy and has long dark wavy hair that flows outward horizontally, violet eyes, a fair complexion, and a small mouth with full lips. Most official artwork of Rose make her appear to be puckering her lips. In battle, she wears a loose red evening gown with large gold buttons, and a large golden scarf around her shoulders and arms. By channeling her mysterious Soul Power through it, she is able to make the scarf glow, and wield it in such a way that is particularly damaging to her opponents. Rose also wears a dark colored body stocking, and manages to fight capably while wearing high heels.

In one of Rose's win poses, she wears a large red ball gown, a choker decorated with an antique key design, and matching earrings (in her ending movie in Alpha 2, she is seen wearing this outfit). Also, a lighting-bolt design is visible on her forehead in this form. In this particular victory pose, she holds tarot cards in each hand, and one in her cleavage. This win pose is reserved for a perfect win in Street Fighter Alpha 3, but is a normal victory in Capcom Fighting Evolution. In the UDON comic book series, Rose is often pictured in this attire, particularly when she is interpreting the future or some removed location.