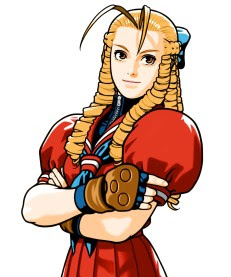 Karin Kanzuki is a video game character from the Street Fighter fighting game series. Karin is a rival of fellow schoolgirl Sakura and has a similar outfit, complete with sailor fuku (this one being predominantly red and white with a blue bola tie), but uses the martial art style Kanzuki-ryū kakutōjutsu (a style she created herself) instead of the original style Sakura uses. Her hair is styled into long, oversized ringlets, and she occasionally wears a blue bow in the back. Due to the fact that she is from a wealthy family, Karin is quite snooty and thinks other people are her "commoners", or inferiors. Her Zodiac sign is Virgo. Karin considers herself a rival of Sakura, who defeated Karin when challenged. Karin is from the super wealthy Kanzuki family (daughter of Daikenjuro and Nadeshiko Kanzuki), whose motto is "All you need is victory" (also interpreted as "Be the winner in everything") and alternately "The worst we'll ever be is the Best". The Kanzuki corporation is threatened by Shadaloo, which then makes demands of the dynasty. She uses the family fortune when attempting to track down Shadaloo as well as a roving Sakura to challenge her again. 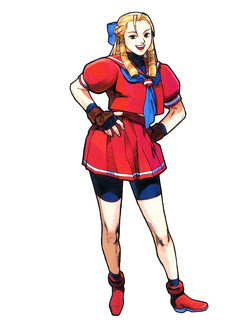 She also encounters R. Mika and battles her, and is so impressed by Mika's ability that she offers the wrestler her sponsorship. Karin eventually finds and defeats Sakura, but realizes the victory was a fluke, and that the fight itself is more important, not winning or losing
Posted by bluedreamer27 at 11:38 AM