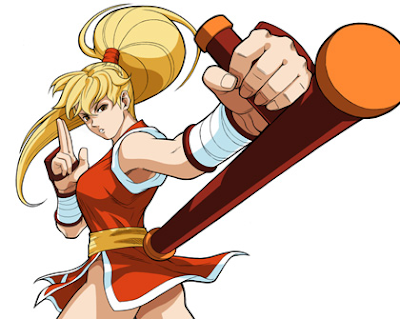 Maki Genryusai is a video game character in the Final Fight and Street Fighter series. Designed as a Bushin ninja along the same lines as Guy, she plays very much like him in both games, being the fast character in Final Fight 2 and the agile ninja with various running attacks in Capcom vs SNK 2. Maki is notable for being the only original character from the SNES Final Fight sequels to make return appearances in later games.

Maki is a bit of a stark contrast in comparison to her sister, being taller and blonde. Her hair tends to be long and held back in a ponytail, her bangs a lighter color than the rest. She wears a red female ninja garb, but designed more in mind for function than flair, showing only her neck and some of her cleavage. Beneath, she wears a semi-transparent vest as shown in Final Fight 2's introduction, when she calls Haggar. She sports arm and leg guards with small boots. Her alternate palette in Final Fight 2 changes her outfit color from red to blue.

Maki's character design was updated for Capcom vs. SNK 2 (and subsequently SFA3 MAX)): she now wears red tennis shoes similar to the ones wore by Guy in the Street Fighter Alpha series and wields a tonfa, which was originally a pick-up weapon in Final Fight 2. Her hair is shown to be one complete color now, the leg guards removed, and the shirt part of her attire is now closed. Some of her attacks tend to reveal that she also wears black panties beneath her skirt; red in Final Fight 2.

An image of Maki in more casual attire exists from Capcom. Herself, Guy, and her sister stand in front of Maki's motorcycle. Here, she wears a black leather halter top that buttons up near her neck (and presumably her waist), black biker-style gloves, yellow baggy pants fastened by a black rope, and a long pink bandanna. Her hair isn't tied back in this design and is more of an auburn color retaining the brighter highlights for her bangs, and appears to be crimped.