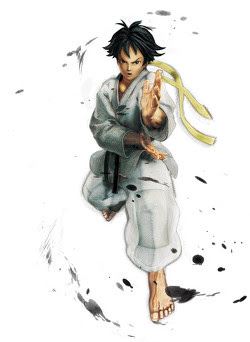 Makoto is a character in the Street Fighter series. She first appeared in Street Fighter III 3rd Strike and is voiced by Makoto Tsumura. She is a playable character in the game Super Street Fighter IV. Makoto is a young Japanese tomboy, raised in the rural Tosa region of Japan[3] and trained in Rindoukan karate. Her karate style is very similar to that of Shotokan karate. Although having little fashion sense for a girl her age, she still hates it when she is mistaken for a boy. She develops something of a rivalry with kunoichi Ibuki, as shown by their alternate opening when they fight each other.

Makoto sports a simple karate uniform, and underneath she wears a red training bra. Around her neck is a long, yellow scarf that hangs down behind her back. Her hair is short and somewhat messy. Her body is very built for her age, having large arms, legs, hands, and feet.
Makoto possesses a boisterous and aggressive fighting style, characterized by powerful punches and kicks, as well as formidable karate techniques. She has particularly powerful and brutal attacks, such as choking her opponent to momentarily stun them or even punching in groin area for one of her Super Moves. She seems to be a person who loves the challenge of the fight, always accusing someone of sandbagging if a fight feels too easy.
Posted by bluedreamer27 at 5:52 PM