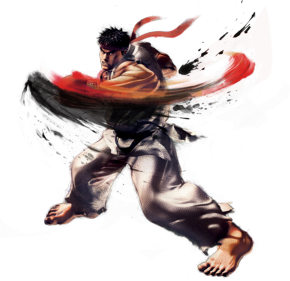 Ryu is the quintessential "basic" character in fighting games with an intuitive array of punches and kicks, and very basic special moves. This simplicity makes Ryu a favorite for beginner and intermediate players. Ryu is available in every single Street Fighter game, allowing players familiar with previous Street Fighter games to begin playing immediately, without having to worry about learning how to use a new character, however, there are a few tweaks in his moveset which vary depending on the game. Ryu's techniques are the "Hadouken" which has become a staple projectile among fighting referred to as the "Fireball", the "Shoryuken" which is a favorite among many players to use, referred to as a "Dragon Punch" and is an uppercut maneuver that hits once, and the "Tatsumaki Senpuu Kyaku" or "Hurricane Kick" as most refer it to.
Posted by bluedreamer27 at 5:50 PM