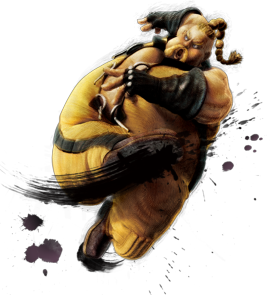 Rufus's basic appearance is that of a fat man with blond hair in a yellow and black jumpsuit.

Similar to how Dan is a parody of Ryo from SNK's Art of Fighting, Rufus seems to be similar to Bob from rival fighting game, Tekken 6. Both are obese American martial artists with blond hair, are incredibly fast for their size, have similar move sets and each a master of their respective fighting styles (self-taught kung-fu based on Snake style in the case of Rufus, freestyle karate in the case of Bob). Rufus' Messiah Kick and its mix up properties are exactly the same as one of Bob's attacks. However their personalities are opposites as Rufus is obnoxious and impatient while Bob is calm and serious, having deliberately gained weight. Rufus is a loudmouthed master of Kung-Fu, hailing from the U.S. Believing himself to be the strongest in America, he develops a personal hatred for Ken Masters, who carries that title officially. Often seen riding his motorcycle with his girlfriend, Candy (an attractive but not very bright, redheaded woman with a notably tacky way of dress who met Rufus while bailing on a diner check; he beat up the waiter), who seems to adore him and agree with his belief. He is very hasty and impatient, constantly jumping to conclusions to reach a goal which often results in him sacrificing accuracy for speed. 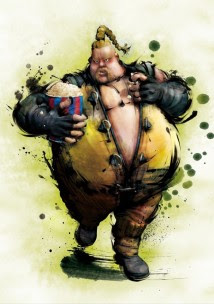 He declares himself America's Greatest Fighter and considers Ken Masters to be his rival. He fights to prove he is better than Ken Masters, though he frequently mistakes other fighters for Ken. According to the Super Street Fighter IV blog, he was born on July 30th, and one of his special skills is karaoke.
Rufus's only weakness is the absence of any projectile attack in his arsenal. His moves are damaging, he has high stamina, his combos are easy to perform, he is very quick, and both the Messiah Kick and Galactic Tornado serve as excellent means to overcome his lack of ranged attacks. Not only is he easy to pick up and play, but players aren't forced into a specific role as Rufus is effective whether played offensively or defensively.
Posted by bluedreamer27 at 5:47 PM