Remy is a thin French fighter character in the Street Fighter series. His first and only appearance was in Street Fighter III: 3rd Strike and he was voiced by Eiji Sekiguchi. Remy bears a grudge against all fighters since his father abandoned his family to pursue the path of the warrior, and his sister died (he encased her in a block of ice underwater in the Bay of Biscay to preserve her). In his ending, he mentions that he must "forget everything" to be happy for it was the darkness of being a warrior that caused his father to disappear and abandon Remy and his sister. He allows his sister's corpse to sink further to the very bottom of the sea, showing that he has put his dark past behind him. 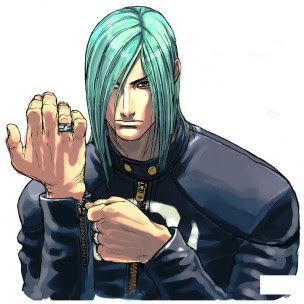 Remy is a long-haired fighter wearing a leather jacket emblazoned with an omega and red pants. He has characteristically large hands, seen in both portrait artwork and sprites.Remy's fighting resembles the French martial art of Savate and his special moves are very similar to those of Guile and Charlie. He is one of the only characters in 3rd Strike that can effectively control space at all times and virtually any range with the combination of powerful long range attacks and zoning techniques.Remy also uniquely, has his moves in both French and Japanese(for the Japanese moveset only.)
Posted by bluedreamer27 at 8:34 AM