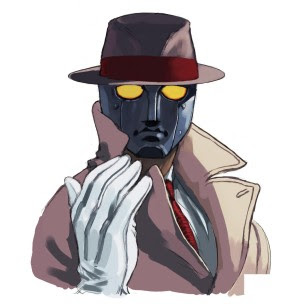 Q is a character in the Street Fighter series. He first appeared in Street Fighter III: 3rd Strike and is voiced by Len Carlson. Not much is known about Q, except that he appears at different places around the world, and may be linked to various disasters. No one knows his real name, if he's human or not or even if he's a man. The CIA is searching for him. 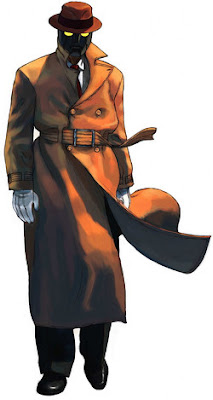 Q sports a hat and trench coat, along with black pants and dress shoes, stereotypical of spies and detectives. His head is engulfed in a metallic shell-like mask which surrounds his entire head. The mask has yellow eyes of varying brightness. Q's neck is the only portion of his body that is visibly made of flesh and skin, as well as his legs during certain animations. The design for Q is believed to be based on similar-looking characters such as Robotto Keiji K (Robot Detective K). Although not a robot, the trench-coat, fedora and gloves are similar articles that H.G. Wells' "Invisible Man" wears.
Q's techniques resemble that of a brute force brawler, through one appearing physically contained, as opposed to a refined martial artist. Most of his move names are descriptions of his actions rather than proper nouns referring to a move name. Q's most signature special moves include his "Dashing Head Attack," a fast and useful attack that can cancel into super attacks, and his "Capture & Deadly Blow," a command grab which sends the opponent into the air for a juggle. His super attacks include a series of quick punches while he moves forward, as well as a move that punches the enemy in the stomach, then an overhead blow with both arms at once upon their head. He also has a move referred to as "Total Destruction." When activated, Q can choose to either punch or grab his opponent, depending on the situation, which emits a small explosion.
Posted by bluedreamer27 at 6:09 PM