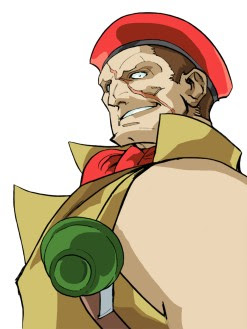 Rolento F. Schugerg , more commonly referred by his first name, is a video game character from both the Final Fight and Street Fighter series. Like Sodom before him, he first appeared as a boss character in the first Final Fight, but later evolved into a playable fighter in Street Fighter Alpha 2.

Rolento wears a very militant outfit with weapon belts (where he keeps his grenades) going over his shoulders and a red beret on his head. He has a red scarf under his worn yellow outfit and fights with a green staff. This is a change from how he originally appeared in Final Fight, in which he wore an olive green uniform, and wielded a brown staff. 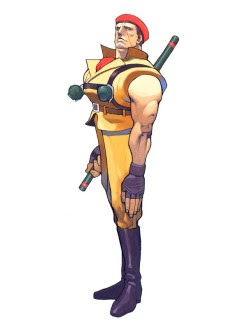 Rolento made his first appearance as fourth stage's boss in the original Final Fight. According to his original backstory, Rolento is a former member of the special forces unit, the Red Berets, explaining his military appearance and skills. He was put in charge of the gang's secret armory-producing plants in Metro City's industrial area and has great influence. He fights using a baton and his special techniques include a wall kick and his throw. When he's low on energy, he relies on throwing grenades instead. When defeated, instead of fading away like most enemies in the game, he blows himself up with his own grenades. After being defeated by Guy, he gained a scar on his face caused by a shuriken thrown by Guy. The Industrial Area stage, and by extension Rolento, was excluded in the SNES version of Final Fight (and its revised rerelease, Final Fight Guy) due to space constraint. Because of this, the developers of the SNES sequel, Final Fight 2, saw fit to include him in the following game to compensate his previous omission. In Final Fight 2, he is the boss of the fifth stage, Italy. His general appearance and fighting style remained unchanged from the previous game and he is the only returning enemy characer besides the Andore from the original game.
Posted by bluedreamer27 at 11:07 AM